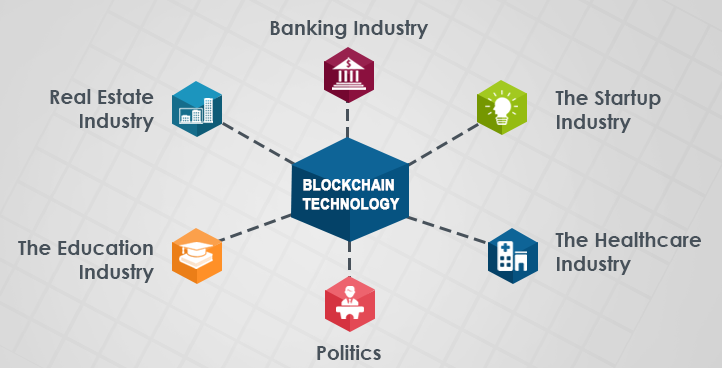 Emerging technologies are a boon and create opportunities and innovation across the globe. One of them is the blockchain technology, whose influence can surely overthrow the way an entire industry works. But then what exactly is Blockchain?

The blockchain technology is the next big thing and has people around the world are trying to find out ways to implement the technology.  According to Don & Alex Tapscott, authors of the Blockchain Revolution wrote: “The blockchain is an incorruptible digital ledger of economic transactions that can be programmed to record not financial transactions but virtually everything of value.” It is known to be a driving force behind transparency and security across the digital ecosystem.

Here are the six prominent industries that are going to change soon:

The blockchain is a revolutionary technology for the Banking industry and has the potential to solve significant issues faced by today’s centralized banking model. Blockchain technology inherently is a secure system and hence a safe place to keep records of the millions of transactions that take place every day.

The blockchain is a decentralized network which makes it better and faster for transactions across the borders without paying a hefty amount to the bank. More than that, the money transferred across borders doesn’t need to follow any KYC guidelines and is way more secure than the regular transactions.

Real estate Industry is an ever-growing industry, and so are its increasing complications. Blockchain technology is an ideal aid for the industry to simplify its terms and increase quick transactions.

The primary reasons for the need to have blockchain technology in real -estate industry can be listed below:

Need for a shared database – Blockchain is a peer to peer network and would work best for leasing, purchase and sale transactions across the real-estate community. It would be more accessible and collate all information from a private database to a public medium.

Less distrust – Blockchain would help to build a transparent record-keeping system across all the computers associated with real-estate.

Smart contracts to avoid fraud – The deal will only be approved if it meets specific clauses and conditions and this would also reduce the transaction dependence.

Cutting off the intermediaries – Trusted intermediaries such as title companies can be removed through blockchain and use it to build a secured and transparency throughout transactions.

Deedcoin is a distributed platform giving power back to the genuine homeowners and buyers by tokenizing the process. It also eliminates any middlemen for a free flow of direct interactions between agents and customers.

Healthcare industry needs a platform which provides solutions to various challenges, and blockchain can be that. Blockchain enabled health care systems would allow a secured exchange of real-time data along with regulation of a set of information on a personal level. The private key can be a crucial player to patient’s data which they can release as per their choice.

This technology can also speed up and fuel a new drug development and even eradicate the substandard drugs which pose an immense threat to the industry.

Health care fraud is threatening and costs the nation around $68 billion every year. Some patients are exploited and subjected to unsafe or unnecessary medical procedures to fabricate claims which also compromise their medical records.

Blockchain will aid in the authorization and identification of people for better health care.

In the recent past, government parties in the U.S. and around the world have been accused of rigging election results but with Blockchain that won’t be possible. Blockchain takes care of various aspects of the election like voter registration, verification of identity, etc. It also makes sure to count only legitimate votes.

The citizens of Sierra Leone went to the polls on March 7 using the blockchain technology and first of its Kind. The tech, created by Leonardo Gammar of Agora, anonymously stored votes in an immutable ledger, thereby offering instant access to the election results.

Cutting a long story short, thousands of startups are looking for investors across the world. But how do they even do it, without revealing enough about the idea and not jeopardizing the investment?

Similarly, it becomes difficult for the investors to find startups, they are interested in investing.

Blockchain technology can be the key to all of that. Companies such as Pitch Ventures are creating a way for startups to pitch investors live securely. It’s a groundbreaking application which allows an entrepreneur to quickly get in touch with an interested investor and turn their idea into the next success story.

Blockchain Technology is rising to prominence every day and can bring significant breakthroughs to the education world. It will combine blockchain, cryptocurrency, virtual reality, etc.

How will blockchain radically change the Education Industry?

Some universities, like MIT, are experimenting where the certification is available on the app built on blockchain technology. This enables the certificates to be indisputable because of the security and inalterability of the technology. MIT’s Media Lab developed Blockcerts that aims to facilitate digital self-sovereignty for individuals’ records. Another company like SocratesCoin has secured Nauka University, which unites thought leadership and science through education.

The blockchain is disruptive to industries but along with that, it will bring transparency and security of data, money and many more.

Do check out our next blog, to know more about the Technology.

We would love to hear from you; please leave your comments and thoughts in the comment section.

AthenaSix industries that blockchain is slated to impact soon04.06.2018