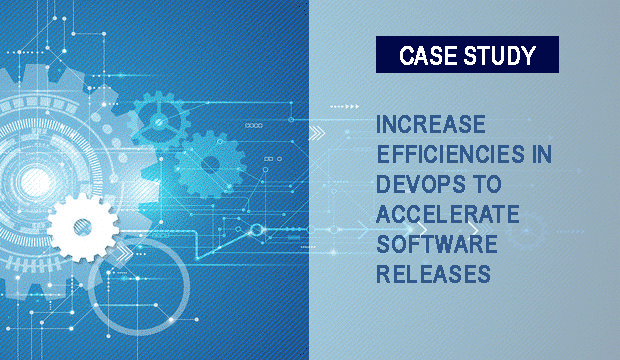 Several enterprises have moved towards agile and DevOps model but have challenges in taking the advantages of these models. Most of these enterprises have legacy methodologies and technologies to release software that cause challenges in transitioning to modern efficient models. Our client is a global software company that serves financial services customers. Our client had several inefficiencies in their software release management that were causing delays in software releases and customer disappointment.

Client had challenges in releasing the software on time as planned. First, there was no standardization in the release management process. The current release management process was partly automated with weaker accountability. The pass/fail criteria for a release every sprint in the SCRUM process were weakly defined and the overall team lacked transparency to make quick decisions on the issues. Second, there were several independent legacy technologies being used to build and release the software to N+1 environment. The manual handshake was not coordinated well and there was a clear need for automation of not just the handshakes but automating the critical test cases and regression test cases. There was no tool that orchestrated the release process end-to-end that gave transparency not just to developers but also to the product/business team. Finally, there were gaps in understanding between business and development/release teams on how and when the finished releases would be launched to the customers.

Antra captured and analyzed the current development, build, and release process to identify the key inefficiencies that were hindering high quality software releases to their customers. We participated in client sprint cycles and interviewed the team to understand and identify the process flows, tools used, and the key issues currently faced.