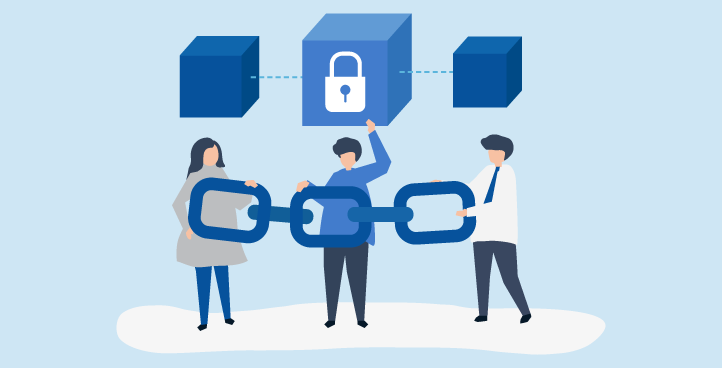 The blockchain technology riveting and not a day goes by when the latest news is not talking about how it is a revolutionary technology. Industries like finance and banking are seeking to incorporate Blockchain Technology into their business and transform. The major financial institutions have jumped to the opportunity to research on how best to implement it. Some are even investing in blockchain startups while others are partnering with Fintech companies to create reliable networks.

If you are fascinated to know about Blockchain Technology, you can read it here.

The advent of the Blockchain technology perpetuated the belief of creating a  secure and build an alternative to the slow and centralized banking processes. However, before digging deep into how the blockchain technology is going to reinvent the finance and banking industry, we need to look at the reasons behind its appeal.

There are two primary reasons:

It is cost-effective – The blockchain technology is a digital ledger and removes the intermediaries which reasonably makes it inexpensive. Also, there are added charges to transfer funds across borders or in between borders.

Transactions are fast –Transfer of funds through blockchain technology needs six hours to a day to complete, whereas a regular in between bank transfer would take days to even register.

Blockchain Technology is going to do to banks what the internet did to media. It is going to transform the financial industry and make it way more efficient. Let’s look at the ways to support how badly the financial sector need the aid of blockchain technology.

The blockchain is a secured safe that paves the way for improved record storage. How?

First, the blockchain technology enables fast transaction which restricts or limits time for someone to intervene and divert payments, or even to capture the transaction information.

Second, there are two security keys: a public key for every user, and a private key that is shared only by the individuals connected with the deal.

Further, each ledger entry, once verified, becomes an inevitable part of the ledger’s chronological record, which is kept by all users. Immutable shared ledgers are one of the compelling aspects of the blockchain technology. Once Person A sends funds to Person B, that transfer is recorded on the blockchain, and it cannot be altered, forever!

An irreversible ledger is a helpful tool for banks and financial institutions to restrict fraud.

Most banking systems have a centralized database which makes it more vulnerable to any data breach as they have one point of failure compared to blockchain which is a distributed ledger. Each block records every transaction with a timestamp and a link to the previous block. This technology would be the Godfather against the cyber-attacks on financial institutions.

Think that you if you work in San Francisco and want to send a part of your paycheck your family in Kenya, you might have to pay a $25 flat charge for the wire, and additional costs which add up to 7%. If we dissect the charges, your bank gets a cut, the receiving bank receives a cut, and then you’re charged hidden exchange rate fees. Over that, the transaction will take days to even register in your family’s bank.

Facilitating payments across borders or even in-between cities is highly profitable for banks. The cross-border fund transfers generated 40% of global payments transactional revenues for the banks during 2016.

BitPesa is a blockchain company focused on facilitating B2B payments in countries like Kenya, Nigeria, and Uganda. Typically, a whopping 9.2% fee is charged on the average for cross-border payments in Kenya which BitPesa is slashing by 3%.

Traditional banks and lenders evaluate the risk of not getting the money back by looking at factors like credit score, debt-to-income ratio, and home ownership status. The centralized bank system often turns away from their consumers because of some potential material error in their credit score, which is scary. One can get information about credit score only from 3 institutions. Restricting this sensitive information among three institutions makes it more susceptible. Last year’s Equifax data breach exposed the credit information of around 143M Americans, which is downright wrong.

Blockchain solves this issue, through alternative lending.  It offers a cheaper, more efficient, and a secure way of issuing personal loans to a broader pool of consumers. With a cryptographically secure, decentralized registry of historical payments, consumers could apply for loans based on their global credit score.

Before we realize all the extraordinary opportunities blockchain technology is going to create for us, there are hurdles we need to conquer before we march forward.

GDPR came into action on the 25th of May 2018, and this restricts the use of private information or data without consent over Europe.  Under the governance of the law, the significant giants across the world have changed their privacy laws and made it stricter. Even though we have just started to venture out on finding out ways to build blockchain enabled banking networks, but its needful that it abides by the laws of today and ensure the safety of data. Financial data is exceptionally susceptible to economic crimes and to prevent that there is a regulatory oversight that needs to be sorted out.